Danny joined ILFSTC as our our Head Tennis Pro – USPTA/ISSA in 2007.  A native of Sao Paulo, Brazil, Danny was nationally ranked among top junior Brazilian players.  He played collegiate tennis from 1998-2001 at UT-Martin where he helped lead the Men’s Sky Hawks to 4 consecutive top-three finishes in the Ohio Valley Conference.  He was the Director of Jr. Tennis at the University Club of Memphis and served as Assistant Tennis Coach for the men’s and women’s teams at UT-Martin. Danny is also a certified ISSA fitness trainer.  He combines his tennis background and fitness expertise to help players excel on and off the court. 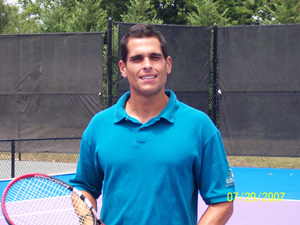